I have decided that blocking is the best thing ever. (Well, maybe not better than sliced bread.... mmmm... bread) but blocking is pretty great. It can work magic on projects that you think are beyond repair! (Like my February Lady Sweater.)
Similarly, this hat when I finished knitting it was WAY huge. Way huge. Look at it now! 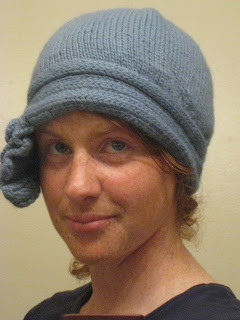 It fits!! Okay - still not perfect, but it's better. (Sorry about the grainy picture.)
It's not close to as cute as in the pattern pictures, but then again, what is? (I finished this hat about a week ago, but didn't want to post about it until I saw whether or not I could fix it with a little blocking.)
The hat was easy to make. Very simple in construction. There was nothing complicated... Yet, it turned out to be too big. And I followed the pattern and swatched it and everything!!! What is up with that?
If I was to make it again, I'd definitely not knit as much before I started to decrease. Maybe I'd knit only 4" rather thatn 4.5". ? And I don't know if I'd increase around the crown of the hat to give it the slouch. I don't like the slouch.But blocking solved all that. Thank you for shrinking the hat! Now it is at least wearable.
But a small note on cloches in general - I think they look better when paired with a short hair cut. Maybe that's why bobs were fashionable in the 20s. So my short haired friends... some of you may be getting these cloches as gifts.
Posted by Jeanne at 10:00

I totally agree about the short hair with hats like these :) You still pulled it off though! :)