Did I really say that?

They say rules are made to be broken... The same is true for New Year's resolutions, right? That is why we make resolutions, isn't it? So that we can break them!! Who's with me? Someone...? Anyone...?
So I haven't broken it yet, but I think I'm on the verge of breaking one of my NY resolutions. And I mean, it's not like it was a crazy resolution. It's not like I promised myself I'd never eat another cookie or bake another cake (both of which would be impossible for me to keep). This resolution seemed totally harmless, easy, doable... But looking back, it was a pretty foolish thing to resolve to not do.
I resolved to: "Stop making so many damn hats! I will try to limit myself to 5 for the whole year!"
Yeah... Um... it's the second last day in January and I've already made two. 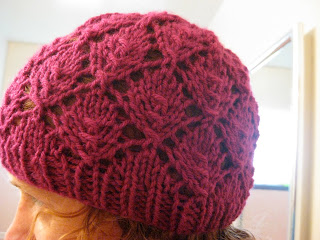 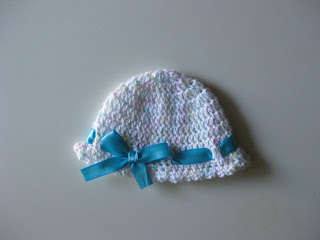 So much for my resolutions...
But both are for gifts! They aren't for me. Does that count for anything? And one is a baby hat. It took me maybe 1.5hrs. With having to make modifications!!
And it's just that hats are just such convenient gifts!! They are cute and useful and can be individualized to who you are giving it to, yet they don't take forever to make. The top one (the first hat I've ever made from the top down. Interesting!) is for a friend on my soccer team and the bottom one is to go with the baby blanket for a baby shower gift.
So I think these shouldn't count towards my total. Cause otherwise that would leave me with 3 more for the year!
Not happening. I'm definitely making more than 3 more hats this year. Actually, I already have plans to make at lest one more. And soon!
I want a new hat/mitten set for camping in NZ in March. It will be fall Down Under (Err - is New Zealand Down Beside?) there by then, and I think a cute new set of woolen items would be fun. I was thinking about a blue hat with red stars in honour of the vacation country. Or I found this cute pattern for a hat with frogs all over it. Either way, there will be a new hat for NZ. Maybe I'll even knit it on the plane. It is a 12hr+ plane ride after all...
Posted by Jeanne at 16:03

lol you have to make more hats!! they are just too cute! That top pattern looks beautiful! And the baby hat is super cute :)

Love the ribbon in the baby hat, very cute!