I have a confession to make. ... I lost the toque I was given for Christmas. I know! I'm a horrible person. But I lost it because I was wearing it so much. I wore it to the soccer tournament I played in last weekend, and somehow it just didn't make it home with me. Some lucky kid probably found it and now has the coolest hat in the world.
Luckily, I just finished knitting up this one. 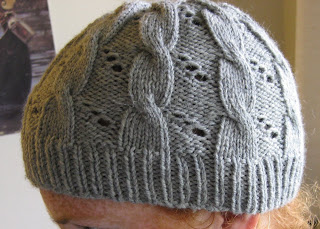 I really like it. It's nice and snug (without being too tight). It took me a while to get going on it, but once I did it was pretty quickly completed.
I did find doing the YO p2tog combination slightly awkward because I was knitting so tightly, but I do like the effect of the three holes in the purling section. I've been wondering whether it would be possible to knit this hat inside out since I think that k2tog YO would be easier. I've never done cables on purl rows, which I'm guessing you'd have to do for it to be reversed but I don't see why that would be any different than done on knit rows. Then again, I could be wrong. Maybe I'll try and see.
The only thing I would change about this hat would be that I'd add another, maybe 4 rows before I started to decrease. 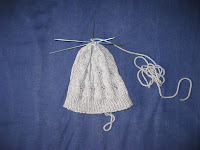 It's a little short and doesn't cover my ears completely and I like a hat to cover my ears. Then again, with the amount of yarn I had leftover, four more rows wouldn't have been possible. What you see in the picture was all that was left! It was as close to a perfect use of a skien as you can get. And really, this was leftover yarn from my Bella Mittens, so it was doubly perfect because in a way it was using up scrap yarn.
(Oh. And I'm going to look online to see if I can find a replacement for the half pipe hat I lost.)
Posted by Jeanne at 16:45