You might be surprised, but I think the best thing about youtube (at least for me) is how many new knitting skills I've learned that might never have figured out otherwise. Forget funny videos. Knitting is what I use it for the most! 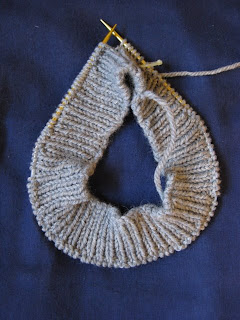 For example, this is my Hermione Hat that I started working on while my completed February Lady sweater was being blocked (more on that devastation in a future post). The pattern calls for Alternate Cable Cast on.
Hunh? I thought.
Well, not really. From the name I knew what they were after (a cast on that gave you a knit/purl in appearance from the very edge), but the technique for that cast on I did not know. I've only ever used the most basic of cast on techniques - the one my mom taught me when I was just a littl' girl. It works fine for everything I've had to do, but in certain cases I understand why you'd want to use something different.
That's where youtube comes in. Oh those kind folks who've posted informative knitting clips have been more helpful than they probably ever imagined! I've always been one to learn by watching, and somehow the pictures and descriptions in books were never quite enough.

Thus far I'm liking the hat. And doubly exciting is that it's using yarn left over from my Bella Mittens. That's nice.
Unfortunately, I'm only going to be able to go so far until I have to buy more needles to finish it. I know. More needles? You'd really think that by now I'd have all the needles I'd ever need, but nope. I'm working with size 5 cirucular, so once the pattern starts decreasing I'll have to use DPN which I do not have.
Posted by Jeanne at 11:28

what an awesome hat!! I need to relearn how to knit haha. I only knew how to make a scarf... and then I gave up! I've only done crochet since then :)