Huzzah! Huzzah! I'm done. Two other projects complete! One crochet and the other knit. Huzzah. 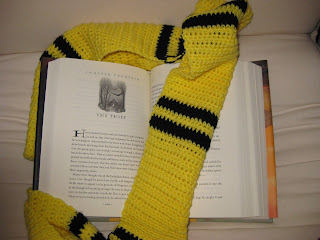 Can you guess what it is? Not such a hard thing to guess, all things considering. Yup. Another requested Harry Potter scarf. But this time it's a Hufflepuff. Obviously. & this one is going to the fiance of the owner of that Gryffindor scarf. Hopefully he'll like it! 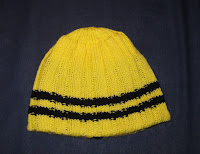 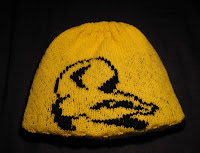 And hopefully he has a small head... Um. I've never met him, so I don't really know. Cause if his head isn't small I'm not sure whether or not the hat will fit him.
With the Gryffindor scarf I ran out of yarn and so I made it short, so I was paranoid with this one and bought a good amount of yarn. Too much yarn. I had a lot left over! I thought for a while about making myself a yellow and black version of the scarf (because supposedly I'm a Hufflepuff too), but in the end decided to make the toque. He gets his scarf last, so maybe he deserves a little something extra, right?
After some Ravelry searching I came up with two things I wanted to use. I really liked the pattern for the ribbed hat, but at the same time the badger motif would help to identify it as what it was. I also thought that with the thin yarn the hat wouldn't be too warm sooo.... why not mesh the two? Hence the idea for the reversible hat was born!
It knit up just like a long tube:
(This picture is the closest to the real colour of the yarn) 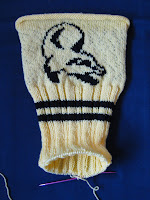 After some smart planning, I realized that the badger (pattern stolen from a sock design) would have to be knit upside down so that when he appeared right side up on the hat. And once the badger was done (I really need to work on my fair isle technique...) I started with the "Chocolate's gone Straight to those Ribs" pattern for the hat. That part was easy enough. The pattern is simple, well written and very understandable.
But here was my modification to make the double hat:
When the number of rows of ribbed hat matched the badger side, I picked up the stitches from the cast on row one at a time and knit it into the working row. It took a while, but to be honest I was surprised how well that turned out! I thought that something would go wrong there for sure! But I counted out ten stitches around the cast on row and placed markers so that I made sure to pick up the right number of stitches in the right intervals, and voila! It worked!
Then I decreased, and it was done!
Huzzah!
Posted by Jeanne at 11:35