In 2002, my bestest friend and I went to Ireland for 2 weeks. One night as we were resting in the hostel after a day of bus travel and sightseeing, we heard the following conversation between two other travelers in next room between a Polish and an Italian guy:

My bestest friend and I nearly burst a gut laughing. (We were a little sleep deprived at the time… Almost everything was hilarious.) It is ridiculous to have two non-native English speakers discuss an English saying. And more importantly if you asked me to name a type of pie, the first one I'd think of would not be kidney and steak pie!
After that event things on the trip were always “easy as pie!”

Which begs the question, why do we say that pie is easy? Cause let me tell you, pie is not exactly easy. (Not that it is super complicated either.) The crust can be kind of tricky, and depending on what filling you do, there can be a lot, a lot of steps!
So while you can’t count on pie to be easy, you can count on it to be good. And is it ever good!

Pi day this year has sort of been a pie week for me. I made three pies this week!
On pi day I made an apple/raisin/cranberry crumble top pie. It was fabulous if I do say so myself. And I do! It was so good that it was gone before I could take a picture, which is unfortunate because it was pretty on top of being tasty! I should have taken a picture while it was cooling, but I planned on taking a picture so you could see the inside of the pie. Um… it was gone with dinner. Oops?

But here are pictures of pies that I made for my work’s Pie Contest. Each year we have a pi day pie contest. (This year we had to have it a week after pi day because too many people were going to be gone on the day itself, but working at a geeky engineering firm we had to celebrate pi day!) 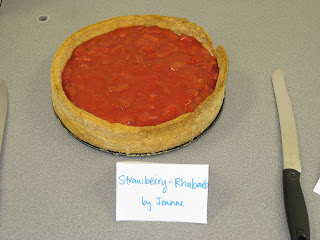 My recipe was actually a little different than the one I found but only because I didn't have enough Rhubarb. I thought I had a TON in the freezer. Turns out, I didn't. My roommate reminded me after I took everything out of the freezer trying to find said rhubarb that I'd used it in a crisp a few months ago. Silly me.
So I added some strawberries to get to the right amount instead. Still fabulous. 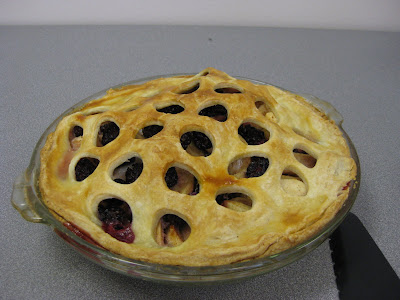 I made it with honeycomb top, since I thought the circle cut outs made it more pi like.
For this pie I just sort of made the recipe up as I went along. The crust (an all butter crust) came from what I call the Pie Bible, but for the filling I just cut up a bunch of apples, mixed it with sugar, flour, cinnamon, nutmeg, etc and then added in some blueberries. I thought it was fabulous.

Yet, sadly, I did not win. And there were some amazing William Sonoma pie plates as prizes this year!! I wanted one!
But to be fair, the pies that won were really good. Okay. I admit it. They were better than mine. Drat!
Interestingly though, I think that the pie that I won with last year wasn't nearly as good as either of the pies that I entered this year. Isn't that always the way? My crusts were definitely better this year. But no need to worry. Now I have something to aim for next year! It gives me a great excuse to practice.
Posted by Jeanne at 23:17