Have you heard? Grey: it’s the new Black.

I was noticing the other day how my wardrobe is suddenly very grey. Not as in gloomy and sad. I just suddenly have a lot of items of clothing that are grey. My clothes used to be predominately blue and brown, but there has been a huge influx of grey recently. Of the four new sweaters I got at Christmas three are grey. (One is half grey/half white.) I didn’t have a single grey sweater before that!

My knitting is no different. It started with my Bella Mittens. Then the hat. And I made a cal(not for me). And I found an old scarf which I started to wear again (It was my first ever crochet project and is totally a weird length/width, but for some reason I love it). And then most recently a shrug. 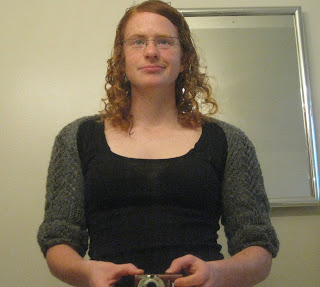 This shrug was made with stash yarn as I waited for the knitting show and my attempt at socks. I bought the yarn to make more mittens and then never did. But I’m glad I had the yarn because it is perfect for it.

I wore the shrug to work earlier this week, and I’ve decided I like it. I don’t love it, but I like it a lot. (I think part of the reason I didn’t love it was the office was freezing and I really should have been wearing a sweater. I will probably love it come spring/summer.) Based on the pattern, I’m actually not done, but I’m don’t know if I want to add the detailing. The pattern says to pick up the stitches along the edge and knit a picot trim. That’s what it’s called in the pattern. I would have never known to call it that. It’s like an embossed edge. So instead of it being straight it has little bobbles along the neck and back. Thoughts? 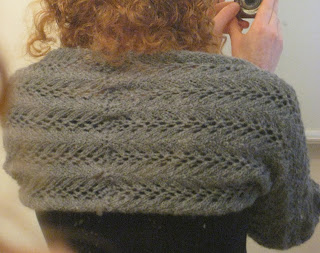 If I were to do this pattern again, there are a few things I'd do differently.

1) I would use the 2nd lace option. Or an entirely different one with a x4 or x8 repeatable pattern. I tried Lace option #1 this time because it was listed as the author’s favourite, and while it gives off a nice effect I found it difficult to get right. You’d think that since it was the exact same row, only offset by one it would be easy, but I really found it hard. I had to frog rows numerous times because I’d get to the end of a row and have the wrong number of stitches having somewhere forgot to yo. I blame it on the fact that unlike with other patterns, I couldn’t see this one. I didn’t have an intuitive feel for it. With February Lady it was obvious what came next to make the gull lace. For this one, I always had to count it out. k, yo, k, k, ssk,… etc, etc. It was a little frustrating, but in the end, it worked out okay.

2) If I did it again I'd do the 1x1 ribbing with an even smaller needle. The pattern tells you to go down by one needle size, but I think that you'd get a much nicer ribbing effect with smaller needles still.

3) I'd use a different cast on entirely. The cuffs are too tight and curl a little. A looser cast on would probably help with that.

My next project? Those socks! Not grey. … Or black.
I’m so excited to try my first sock pattern ever. I think I have to email my university dorm roommate who made me a pair of socks one year for Christmas to tell her. And thank her since I still love the ones she made me. I really am excited! I’ve done my swatch and it’s crazy how small the stitches are compared to what I’ve been knitting recently. Between size 2 needles and size 9 there really is a difference. I think the socks will go slowly… but hey. At least I have the prettiest ball of yarn in the world to work with.

You make such cute things!! I love the cozy too!! What are you making for pi day? :D

Thanks for the insight; I'm making a shrug myself...I had the same problem with the lace pattern! I decided to just do stockinette, simple and clean, with a hemmed sleeve, it won't take away from my dress at all. 100% silk. I'd like to have a scalloped edge, too. We'll see! It won't be anything like the pattern at all. I'm increasing a few after I divided for the body. I really hope it turns out!