Is this not the prettiest ball of yarn you ever did see?
(And I sneakingly convinced my roommate to wind it for me. I really need one of those machines that does it! Didn't he do a fab job?) 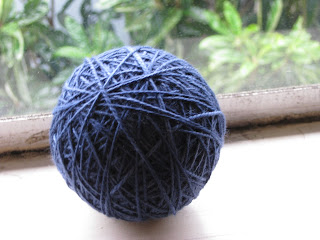 I got it at Stitches West. Yay knitting conference! (I'm a horrible blogger. I realized I'd left my camera at home as I was parking. I'd meant to take of some of the booths.) It was so much fun. And it was soooo overwhelming. I have seriously never seen so much yarn in my life!! Except for maybe last year.
Actually, I'm pretty sure it was bigger this year. In fact, one of the things that surprised me the most about SW this year is how crowded it was. I couldn't even get into some booths it was so crowded! And I had to push my way through some of the aisles! You'd think that in these hard economic times, there would be less money to put into something like knitting, but from the looks of it, crafting is one industry that is still going strong.
One thing that was the same about this year and last year? I left with a headache. One thing that was different? This time I bought yarn. In fact, I bought $130 worth of yarn, which in the grand scheme of things isn't that much, but it is still a lot.
I felt a little left out again this year since I was in 100% store bought clothes. I debated wearing my February Lady Sweater, but in the end I'm glad I didn't. There were TONS at the conference, and most were nicer than mine. And who wants to be wearing the same thing as everyone else? Almost everyone was wearing something handknit. I saw some amazing scarves, cardigans, vests and shawls. But I also saw some lack luster knits, and I worry that in contrast to some of the amazing knits out there, mine would also look amateur. Perhaps by next year I will have a rocking craft I can show off too.
Maybe I will have made it with something I bought! 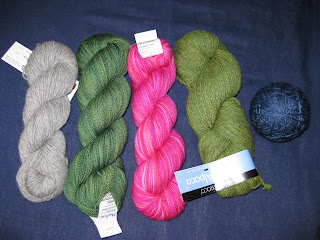