Question: Does a cup of tea stay warmer for longer with a knitted teacup cozy? And if so, by how much?
Do you remember doing experiments in HS? I have a vague recollection of them. Most of those memories revolve around trying to remember the French words for nucleus and malleable, since my sciences classes were taken en francais, but I still remember those classes. And I remember the lab reports. Oh lovely lab reports.
Well, here is my lab report, using the scientific method, in order to prove my hypothesis.
Hypothesis: The tea in the cup with the cozy will stay warmer for longer since cozy will act as insulation on the cup. 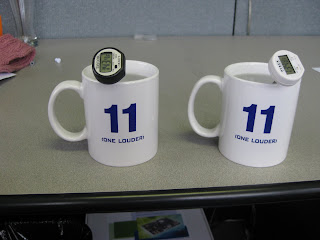 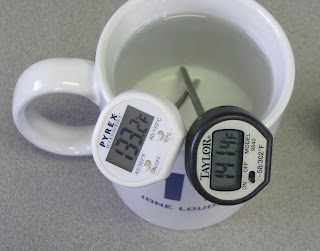 Problems with my experiment? My thermometers were WAY off. As you can see, one measured the temperature to be 133F while the other said 141F. Great. But I continued on with my experiment anyways. (The white one is pretty old and has been submerged in water a few times, so it isn't that surprising that the measurements were totally accurate. But still annoying.)
Here's what happened: 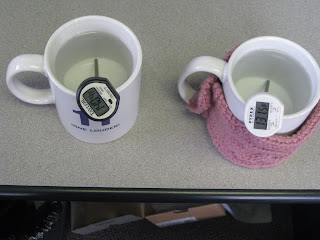 When one minute had gone by (t = 1min) woc was 138F and wc was 130F. This already lead me to believe that the cup with the tea cozy would be warmer for longer since the cup without lost 2 degrees whereas the cup with the cozy only lost one degree. 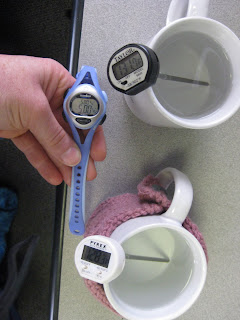 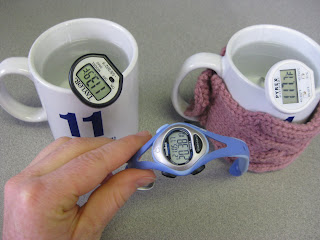 By the time 20 minutes had gone by woc measured 113F and wc measured 117F.
Conclusions: Either way you look at it. I think wc wins. After 20 minutes it registers a higher temperature than woc. If you reason that although the white thermometer's temperature gage might be off, it would probably still record the delta correctly, then wc lost 14F while woc lost 26F.
That's a significant difference.
Either way? Go knit yourself a cozy! You'll be happy you did.
Posted by Jeanne at 15:08