When I was in University, my housemates were probably the best pranksters on the planet. No joke. For my birthday in first year they filled my room with enough balloons that they were up to my waist and came tumbling out when I opened my door. I don't even want to think about how much hot air that took. They also once miniaturized everything in another roommate's room. Another time, I think in fourth year, one of them put cream cheese icing into my toothpaste tube. Yes. He actually used a toothpick to push it in there. And yes, I actually brushed my teeth with the icing. Let's just say it is not something I suggest!

Well, they taught me well.
For the past few months I've been doing an experiment/prank on my family. Every week or so I've been moving around the photos on my parent's walls. Thus far no one has noticed the change. I guess after awhile pictures become like decoration. Background noise. You don't notice them. Because they don't change. Or do they!? They do in HP. And then do when I'm around.

This past week I stepped up my prankster ways by adding mustaches to my older brother and I. Mine isn't so great, but I am in LOVE with his. 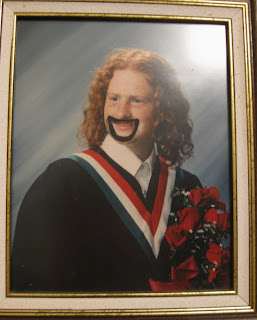 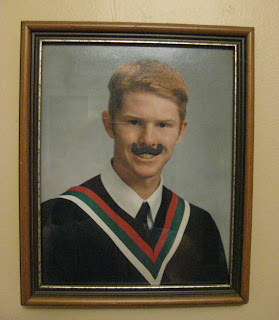 I cannot wait until someone notices. I figure if a week goes by I'm going to start adding more stuff, like cartoon thought bubbles. Any suggestions? I'm thinking my bro's should be: "Mamma Mia, what a meatball!" or maybe "I'll save you Princess Toadstool!"
So many options. So few mustaches.
Posted by Jeanne at 07:40

HAHAHHAHAH I so love this prank! I was never around pranksters I wouldn't know where to start!

Seriously. They were the most creative and patient guys ever. I could probably write a book with all the pranks they pulled! hmmm...