Before the weekend, I didn't have many plans on what to make for my nephew baby G. A hat? Maybe a sweater, if I had the time. But then, I saw the absolutely cutest monkey that my friend Adrian made, and I thought: I can make that!
Okay, so what I actually thought was something more along the lines of: Well, I can try to make a sock monkey, but I don't think it will ever come out quite as cute as Adrian's. (He's pretty darn crafty.)

Well, look at how mine turned out! 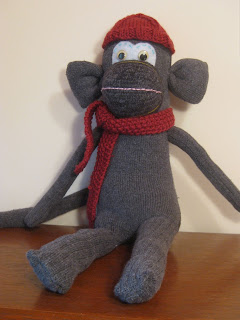 I have to say, I'm pretty proud of him! And, truth be told, he wasn't that hard to make!
Following these amazing step-by-step instruction, it only took me about 3 hours start to finish (while watching the Arsenal [English Premier] game). Not too shabby for an old pair of socks that were going to get thrown away anyways! 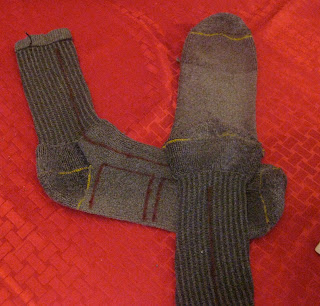 I didn't have a erasable fabric pen, so I used a sharpie. What does it matter? It's on the inside and going to get cut out anyways. 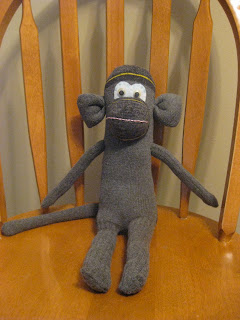 When my monkey was done he looked a little... well... boring to me, so I decided to knit him up a hat and scarf from scraps. I wouldn't want him to get cold. Winter is coming, after all. 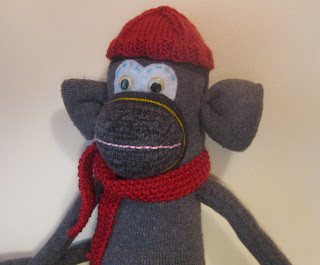 Now he just needs to be wrapped up and put under the tree for baby G. Although, I have to admit that I like him so much, I almost want to make one for my niece M, too.
Posted by Jeanne at 07:16

OMG I love that you made it a hat and scarf! Too adorable! Great job!!

Yeah, i agree, love the hat/scarf!