Fetchings and being a little annoyed

Has anyone else had this happen to them? I bought needles at my LYS two weeks ago, and when I got home I realized that I already had a set of #3 DPN! Oops. And to add insult to injury, I didn’t even need #3 for my project. I really needed a set of #4 DPN. So I bought needles I already had and really didn’t need! Well, I needed to get my yarn for the fetchings (seen below) so I took them back to the store this weekend, hoping to return them. I had the receipt, but they wouldn't let me return them. I asked if I could exchange them, but no dice. The package wasn't open - it was obvious I hadn't used them and then decided to return them. Supposedly they have a 24hr return policy on knitting needles. What's up with that? They aren't open Sundays and close at 5pm on week days. How am I supposed to get there any day except Saturday? There is absolutely no way I can get to the store 24 hrs later, even if I had realized they were wrong. But, get this. They will take yarn back up to 90 days after purchase. Weird. I think so. I guess they don't want people using needles for a project and then returning them. But this was not that. I say again - the package was still obviously sealed.
Anyways, luckily they weren’t bamboo needles or anything, so they weren’t too expensive. But I was still annoyed.

But, onto my weekend project. The Fetching! I love them. Relatively.
I loved working with the yarn. Berraco Ultra Alpaca. It’s a nice thickness and has a nice feel. 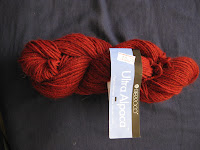 There are a few things that I would change about the pattern if I was going to do it again. I would add another repeat of the cable at the top and I’d lengthen the thumb. Maybe it’s just me, but I’d rather that the fetching cover more of my hand than they do when you make them as the pattern explains. Similar beef with the thumb. Otherwise, the pattern was fun to do. I love cables, and used a real cable needle for the first time on this project. (I’d always just sort of worked it without the needle or with a spare #3 DPN (ha!) on other projects if that makes sense. It didn’t always work out well.) I was a little surprised that there isn’t a gusset on the fingerless gloves, but to be honest, it does sort of work without it because of the way the ribbing is done. 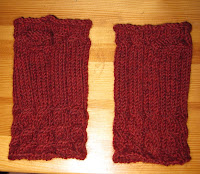 So, they are in the mail and I hope the best friend likes them. 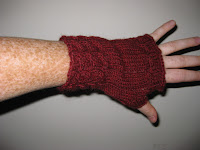