Beyond a shadow of a doubt, one of the things I hate most about knitting, is frogging. I try my hardest to NEVER have to do it. I hate it. I hate seeing stitches disappear. I hate seeing all of that hard work get unraveled.
At the same time, I'm somewhat of a perfectionist, and I know frogging is necessary. I'm sort of like a inconsistent perfectionist. Sometimes I just HAVE to do something perfectly and will take something wrong out no matter how small the mistake is. Other times, I'll let it go, telling myself: "No one is ever going to see this mistake."
I guess it just matter of how noticeable the mistake is going to be. And how much I care about the project. Or how much I care about the person the project is going to.
Well, I really do love that nephew of mine. I've restarted his sweater twice! Frogging at least 4 hours of work in the process! The first time I had to frog because I was stupid and used the wrong set of needles. I did the sizing swatch with the set of size 6 needles, but didn't think about what size I needed to use to start. So I cast one, and started knitting. Then reading ahead in the pattern, it tells you to switch to the larger needles. Umm - the size 6 are the larger needles in the pattern. I should have been using the size 4 to start. So I frogged.
I told myself I'd be careful the next time, and so I cast on the project again. I was feeling good about myself when I got to change to a different size needle part, glad I was right on track. But that's the thing. I wasn't on track. I started working on the twisted tree part of the pattern, and something just didn't match up. At first, I thought the pattern was wrong... but with a little more investigation, some math and then some counting, I found out that the pattern was right and I was wrong. Instead of casting on 138 stitches, somehow I cast on 128. So, what to do? I thought for a moment about making it as is, and modifying  the pattern as I go to be okay with 128 stitches, but that seemed like it would be more of a headache in the long run than just frogging. So that's what I did.
And then I started to wonder - Universe! Are you trying to tell me to make Xavier a different sweater? There was no answer obviously, so I just decided to push through and start again. Here it is thus far, with one repeat of the twisted tree pattern done. 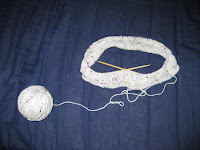 And as a final update on the Aunt Again sweater - here it is with the buttons sewed in place. You can't tell, but they are little fishbowls and pretty cute if I do say so myself. 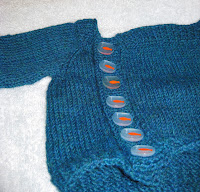