I took two balls of yarn to NZ. Both grey. With these two balls I made a set. One hat. One pair of fingerless mittens (to be posted). And this scarf. 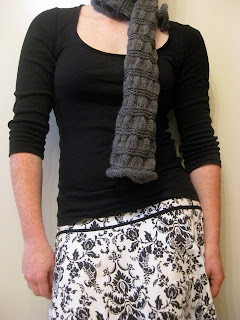 I'm not in love with it. I started it in the Auckland airport and was more than half done by the time I landed in the San Francisco airport. Easy pattern! 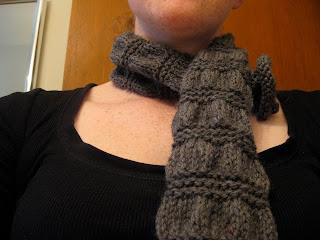 That said, it's just sort of boring. It was a little boring to knit. And it's not overly lovely. What do you think? It does have some texture to it. And I like the small ruffles that result... but it doesn't really have much wow factor. Maybe the fact that it's grey doesn't help. Maybe it's going to be a good go to scarf because it will match a lot of things. ?
It was perfect for knitting on the flight. I didn't have to look at the pattern. Almost ever. I read it online. Wrote it out quickly. And after the first round through, I just kept going until the ball was done.
But now that I'm back, I am looking forward to knitting something that takes a little more concentration! :)
Posted by Jeanne at 02:20

I want that scarf AND the skirt! Super cute

I think you need to give the scarf more credit, PLUS you are so right, it goes with everything!

I don't think it's boring at all. Go Gray!