The good, the bad and the annoying! One project, so many comments to make. Where to start?! How about the good news? 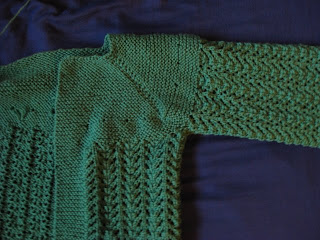 My February Lade Sweater is coming along really quickly! Yay! Seriously. It's going pretty fast. I finished the body and the sleeve on Tuesday night. Big Night! (I was knitting both at the same time so that I had mindless garter stitch to do whilst reading and gull lace to do whilst watching tv.)
But I'm so excited that it's going so quickly. I don't know why I never thought of it before, but one of the reasons that the sweater is knitting up so fast is that I've been bringing it into work most days and spending the last 10 minutes of my lunch break knitting. I'm not spending any more time at lunch, but now when I'm done eating and I'm just chatting with coworkers, I knit!
In December when I really didn't think I was going to have enough time to finish the three cals I made as gifts, in a desperate push to get more knitting time in I brought one project into work. Well, I finished them, and it made my days so much happier that I decided to try it with this sweater. You'd be surprised by how much an extra 10 min of knitting a day can make a project go faster. It is just a little bit less than an hour if you do it ever day.
So yay for fast knitting.

Onto the bad news.
I'm afraid that I don't think I'm going to like my February sweater and it isn't going to live up to my third bullet of my New Years knitting resolution. I haven't decided for sure, but when I try it on there's just something about the sweater that is off. I'm really, really, really hoping that some blocking or something can remedy whatever seems to be wrong, but I'm not holding my breath.
It's funny because I love almost all of the other projects I've seen that use this pattern. And I think that my sweater looks like theirs. So what's wrong? I don't know. I just don't know...
With just one more arm left I should hopefully be done soon and hopefully there will be some sort of magical transformation.

But that arm is going to take a little bit longer. I wasn't lying when I said that the WIP was knitting up fast... I've just had a small set back.
I started the 2nd sleeve last night during LOST (which I'm really enjoying by the way) and thought I'd done an okay job having completed about 5 rows during the episode. Well, with 5 minutes left in the show I clued in that something was wrong. What was it?
I was knitting the sleeve inside out. Yup. Totally wrong. There's no way to fix that except by ripping, so this morning I spent an hour doing just that! That 2nd needle there (the green one) is me picking up the stitches so that I can frog back to there. The frogging worked out okay and now... I'm annoyingly back to where I started last night. 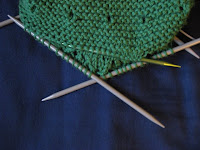