You know, I think this is the most clever picture I've taken in a while. 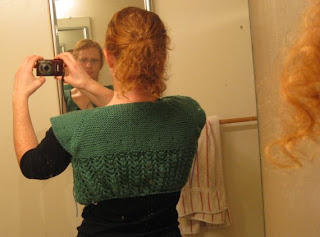 I didn't say GOOD picture, I said clever. It is quite obviously not a good picture... (Please, ignore my frizzy hair) but I am trying.

I wanted to take a picture showing the progress I've made, because I feel like this sweater is going super fast, and I thought the back of the sweater would be a good way to show that. This is one of those horrible shots you get by taking a picture of yourself in the mirror. The clever part comes in because I used a second mirror to see what I was taking a picture of over my shoulder. Okay, maybe not soooo clever, but I thought it was a good idea while I was doing it. 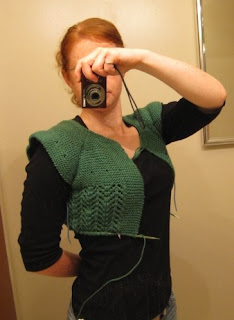 So there it is. The back and one side of my February sweater. I'm pretty happy with it all things considered. I don't love the yarn, but I do like the colour. The gull lace pattern is going better than I thought it would. It's not hard to memorize and it becomes glaringly obvious when you've made a mistake. The few mistakes I have made are undeniably from me forgetting to YO at some point in the pattern. I probably should have gone back to fix the mistakes, but instead I've just tweaked the next RS row so that I get the correct number of stitches back. Not that hard, and I don't think it's that noticeable at all! If I can't see my mistakes I figure no one else can either.
Posted by Jeanne at 10:53