Ever since this year's Stitches West, I've seen this garterlac and enterlac everywhere. I saw a few scarves at the knitting show and I think even a sweater. At the time I fascinated by it (although I thought then and still think that it isn't the most beautiful of patterns). I just couldn't tell how people had done it. It almost looked like the scarves had been woven together from smaller thin knit strips.
I finally decided, I had to try it for myself. 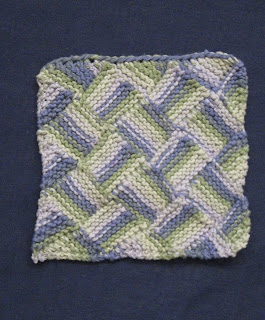 And so I did and I made this pot holder/dishcloth (shown in the last post too) to give away with the jam I made. I hope my exchangee likes it!
Anyways, it's pretty cool how it's done with short rows, picking up stitches along the side to make the block. I meant to take pictures along the way to illustrate how it was done, but it went so fast I didn't take a picture until it was done. Oops. As others have said, the pattern is addictive. Seriously. I was unable to stop making it, telling myself, I'd stop after the next block. I'd stop after the next row.
Good thing about that? It was done faster than I expected.
Posted by Jeanne at 10:03

I love the colors, but you're not going to want to wash dishes with it.