OMG. Is that a (bad) picture of a knitted item? Me? Knit!? It's hard to remember a time when I was truly knitting. It's been soooo long since I've finished anything. But even longer than that, I haven't done anything fairisle since these hats over a year and a half ago! 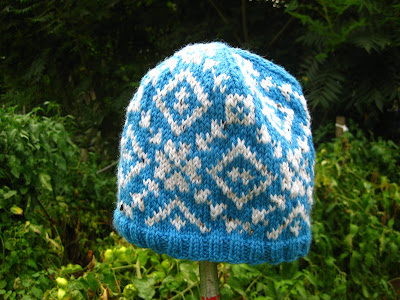 Is it a coincidence that this was also made as a gift? (Prolly not, if you know me.)
One of the nicest girls ever, who I've played soccer with for the past two years, is moving to a place more North than Ottawa. (She's an amazing soccer player too. I'm very much going to miss having her on the team!!) I think the direct quote from her is, "It's a good thing I like winter!" Yes. Good thing. But another hat can't hurt right?

I made one slight modification to the pattern. Instead of having the contrast grey colour along the decreases on top of the hat, I kept it in the main colour. 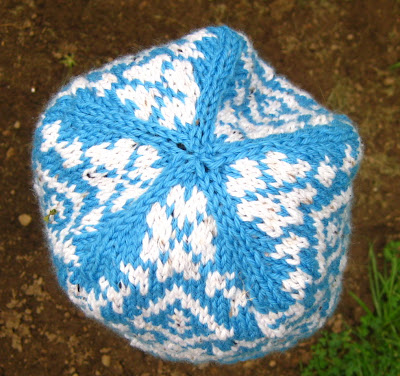 I was worried I was going to run out of the grey. But I also thought that the hat would look better with blue along the ridge. Either way, I think it turned out pretty good. Hopefully it keeps her head warm.
Posted by Jeanne at 07:11

I bet she will love this hat! Plus it will keep her super warm during those long winters :)