Well, I'm back in Ottawa, (brrr! it is cold here! COLD. Like, I've been contemplating BUYING mittens. BUYING. How wrong is that?? I guess I know what I'm knitting myself next. Let's just hope I can hold out until after Christmas!) but I have another Vancouver knit to brag about. Look! 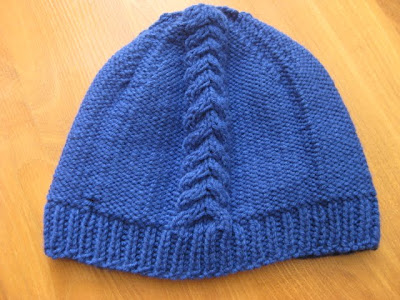 I saw something similar to this when I was walking the streets of Vancouver (only in white) and I decided to make it. This blue was the only yarn I had with me, so this is what I used. & I like it!
If I were to make it again I'd probably only do one cable and I'd make it bigger. 10 or 12 stitches wide rather than 8 stitches.
But all in all, pretty good for a random pattern completely made up. (We all know, I've had some disasters!) Now I just actually have to finish my other Christmas projects! It's looking unlikely that it's going to happen! But I still am hopeful.
Posted by Jeanne at 20:50 1 comment:

I love vacations. Sure. Who doesn't, right? It's a great time to get out and see new things and do things you wouldn't otherwise do. It is also a chance to do MORE of the things you already do. Just in a different location.
I've been in Vancouver/Seattle for the past week and have been having a freaking fabulous time! I think in the past week I've centupled (initupled?) my coffee intake. When in the Northwest and all... And thus I've learned that, yes, I still don't like coffee. Lattes, sure. As long as they have good flavour to them. 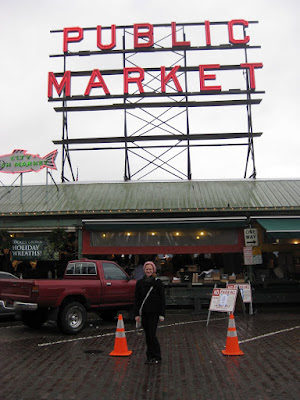 But I do still love chocolate. On Monday we went on the Theo Chocolate tour and it was SOOO worth the $6. I'm sure I ate at least that much, if not more in the samples. 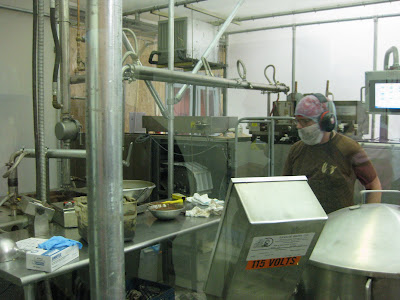 And the chocolate was sooo good. So good in fact that that I think I bought like $50 worth of chocolate. (Christmas gifts. ... really... they're Christmas gifts.)
Plus, the tour was educational as well! If you are in Seattle, you have to go on this tour!
And although it has been a little rainy... I don't mind too much. It is Vancouver after all. That's why I brought a rain jacket! 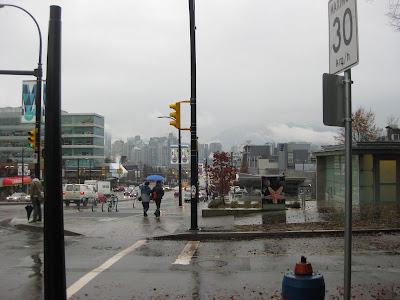 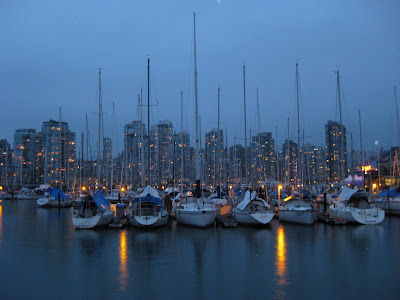 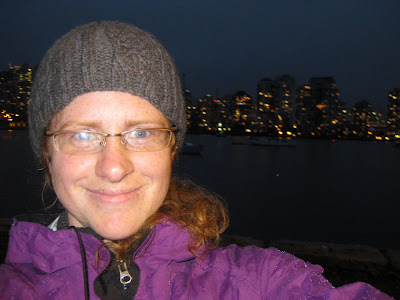 Okay. But onto the point of this blog. This vacation has also given me the chance to finish a few knitting projects. Like my Hermione hat! (you know... the hat she's wearing in the graveyard scene) It didn't turn out great... but I like it. 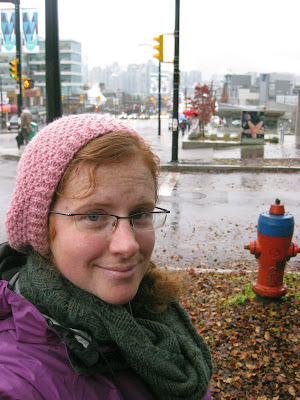 This is another pattern that came from my head. Here's what I did:
CO 80 sitches.
Join and K1, P1 for 1 inch
Then repeat Row1-4 until it measures 6 inches. (Or longer if you want a longer hat)
R1: K1, P1 to end
R2: K to end
R3: P1, K1 to end
R4: K to end
Then... I wouldn't follow my decreasing method. It was very random. Just decrease as you normally would for a hat.
Being me, I'll probably make a better one. One that will hopefully look better once it's done. But for now it is my go to hat. (Every time I wear it I want to go see the movie again. What's better than that!?)
Posted by Jeanne at 12:11 2 comments:

Wow. I can't believe that it's already December! How did that happen? More importantly, how is it December, and I'm only done one of my many Christmas crafting. This might turn out to be ugly!
Unfortunately, I don't have a good excuse. But I do have a few random craft (among other things...) to show for my busy-ness. Like this hood-type-thing: 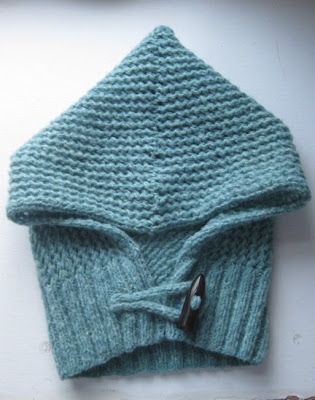 This one took me a whole, about 15 minutes. Okay. Maybe twenty. Because this hood is 100% reused. Even the i-cord. Even the button!
As you may recall, this isn't the first time I've tried to reuse an old sweater, but I do think it's the time it came out the best. (Okay. Almost anything would have turned out better than those other times! Those were some bad crafts that I don't think have ever been used in real life.)
For this hood, I took the sweater, but it at the seams and then along the top. I picked up the stitches and then sewed it. Voila! I'm planning to line it with fleece to make it warm enough for the winter.
Posted by Jeanne at 19:24 2 comments: