long, long time ago. In a craft far, far away…
Ha!
So, you may remember this cross-stitch. Well, I finally have the date to add it in. So the gift is almost complete. After that I just have to worry about framing it! Eek. I’m planning on framing it myself. That will be a first. I'm not sure how it's going to work. I chose this particular craft so that I could try to frame it with a standard 8.5 x 11 frame. That's the size of the picture. But I'm worried that I'm not going to do the framing right. Maybe I should read up on that on the internet...

But let’s step back a second, I have another problem.

roblem? What's problem? How could I have a problem with adding in a few words?
Well, It’s a font problem. After many font trials, I chose one that I partially made myself. Well, I copied it. The capital letters come from a book where I saw the ‘A’ and fell in love with the way it looked. (The book was Alex and the Ironic Gentleman.) But since that time I’ve returned it to the library. And now, happy couple are getting married in September. If it was August, I’d be golden, but I don’t know how to do the ‘S’ in that font! Eek. It’s not a very intuitive font, so I don’t know what I should make it look like.

Either way, it’s going to be a mad few days of crafting and framing. I’m going to try and get my latest afghan done too. I made it sort of on a lark, but I have a different friend who lives in the same town who is having a baby in December. These friends are common friends and thus I’m thinking I can mail them at the same time to the same person, to be divided between them. So, I will need to get that done for Friday too to get it out on time. Yikes!

Wish me luck. And fast crafting.
Posted by Jeanne at 19:19 No comments: 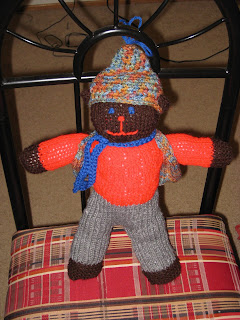 Oh. I know. My crafts are so boring lately. Here's yet another bear. But this one was requested. And I hope he will be liked once he is delivered. (Yes. Although this is a mother bear patterned bear, it isn't going to that cause, but to a friend.)
And with all of the Olympic watching I've been doing, I've had a lot of time to craft. I'm also almost done a very small afghan I've been working on. I got the yarn for cheap, but there wasn't a lot of it. I think that it's going to turn out nicely. We'll see.
Posted by Jeanne at 10:44 No comments:

A look back: My first ever project

This is a look back at my first ever knitting project! How cool! I found this when I was looking for something else on a visit to my parent's house last week and recognized it instantly. I remember my mom teaching me how to knit and then starting this scarf for me. I remember working on it on the 1.5hr long bus ride home. I adorned a teddy bear for years once it was complete. Notice how the two colours aren't even. I did the green side first, and by the time I was that much done the maroon, I couldn't take it anymore and quit! Ha.

But look at it! Look at the huge holes that are rife through the green side.

And I love the two lone rows of perl in here. My mom must have thought that I was getting bored, or showed promise to have tried to teach me that! 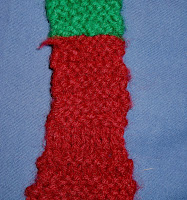 Anyways, I loved seeing it and thought I would share.
And yes. I'm stilly trying to come up with my next project...
Posted by Jeanne at 21:53 No comments: