It's winter. Definitely, definitely winter. There's snow. There's ice. The temperature is in the negative degrees. & I love it.
After 6 years in California where winter is little more than a rainy season, I'm really enjoying having a real winter. It's such a novelty! I don't even mind brushing snow off my car in the morning. I know! Crazy, eh? Sure, that'll probably change by next year, and I'll be like everyone else and longing for summer, but right now, I like all of it! Especially that I have a reason to wear hats and scarves and mittens. 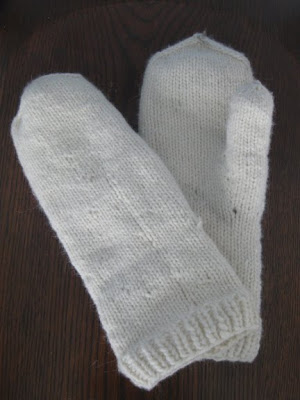 When it comes to knitting, mittens were one of my first loves. In high school they were pretty much all I made. I made mittens for my best friend. I made mittens for the boy I had a crush on in Gr11. I made mittens to be sold at the church bazaars. I made mittens for the kids I babysat.
And maybe I burned out on mittens, cause I don't make mittens too often anymore. I've made a few arm warmers, but those are different.
But with all that yarn from the ugly sweater I made the mittens above to match my hat. Amusingly I almost made two right hands. The pattern I used to use was good for either hand so I didn't think about it until I was just about to start the thumb. Good thing I realized it!
These mittens rock. I wore these mittens skating on the canal and they totally kept my hands warm! Wool is the key I think. It just keeps the heat in so well. It helps too that the cuffs are long enough to go inside my jacket. Both good things to remember for when I make my next pair or warm mitts.
Posted by Jeanne at 07:54 3 comments:

Frugal or cheap or just crafty?

They say you learn something everyday. Well, while I'm not sure that's true about today, I did learn something back in December. Did you know that they have 50% off days at the Goodwill?
Okay, so that's nothing special or exciting, but it does have to do with this post. Because when I was in the Goodwill just a week before Christmas to look through the kids books and shoes (man, does my niece ever love shoes!) I ended up coming away with this: 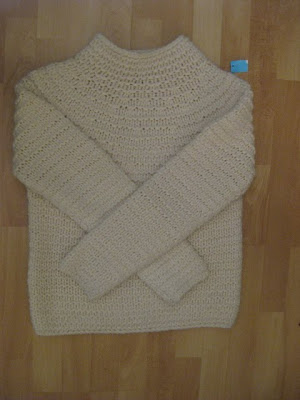 You are probably wondering what this ugly XL sweater has to do with anything. Sure I got for the low, low price for $3. But who in her right mind would buy it?? If you aren't wondering that, you should be!
Well, I didn't buy it to wear it. I bought it for the cheap wool. Does that make me cheap? Or frugal? Or just plain crafty? I'm going to go for the third. That's the one that makes me feel the best at least.
Out of the unraveled wool I was able to make a hat, mittens and the biggest scarf/cowl thing in the world.
Here's the hat! 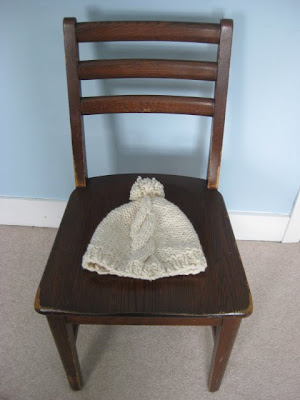 As you can probably tell, it's my own random design. A random cable thrown in for fun. And even more fun: another pompom! 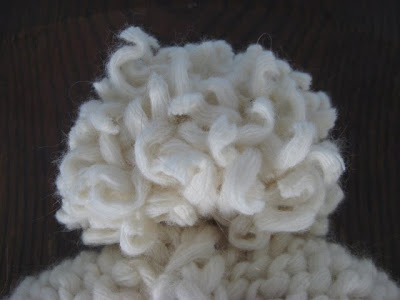 The best part about this pompom is that because I made it with previously used wool, the strands don't stick straight out, but curl. I think that's pretty freaking cute.
Posted by Jeanne at 08:18 3 comments:

Do you remember being 6? or 4? (It's hard being 4 as I'm learning via my nephew...) When someone would say something, "Yeah. She's pretty. ... pretty ugly!" (Or it's hard being 22.
Well, in this post when I talk about pretty ugly, I'm not really referring to that. More like, when something is so ugly, or so different that you think it shouldn't work and then it just DOES!
So awhile back I was chatting with steph, who send me the pic below and said: "... look at the hat attached. ... It's so super ugly but it's to the point of being freakin cool."

(Picture from... Well, actually, I don't know where Steph got it from... but somewhere. I didn't take is.)
Well, I immediately knew that I *had* to try to make her one that was just as cool. So I raided my mismatching yarn leftover from old projects. I put it all together. Made a random pompom (I used to hate pompom, but I think I'm coming around after this hat!). And voila! 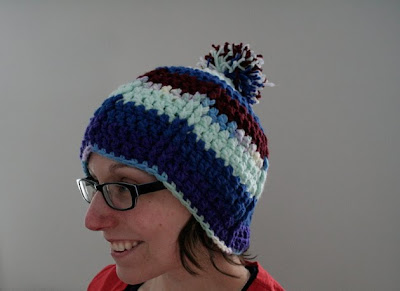 My ugly version of the hat!!
Um... yeah. It's ugly isn't it? When I finished this hat... I almost didn't send it. It sat on my desk for a week+ and I kept thinking, I just didn't get the so ugly it's pretty thing right. The colours are TOO different to work.
And then it started to grow on me. Look at it for a moment. The weirdo combinations will start to grow on you too. I promise!
Although maybe it's about the girl in the hat looking like she likes it. Because the review: "you know it really isn't that ugly :) " and "You are so right about it growing on you, when I first saw it I was like wow that's pretty ugly and the more I looked at it I was like that is fun!!!"
So yay for being able to use scrap yarn and make something ugly into something... well, still sorta ugly, but more importantly is fun! You know, I like it so much, I might just try doing this again.
Posted by Jeanne at 19:32 3 comments:

This isn't the sweater I was planning to make my nephew this year for Christmas. 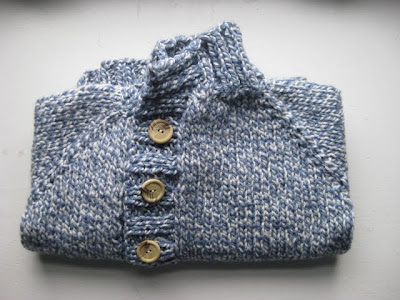 I was going to make him this super cute vest. I even started the super cute vest while on my way to Vancouver. I was a good ways into it when I realized my gage (although I did a swatch) was totally off. Very off. But rather than rip it out... (because ripping out knitting is like ripping my heart in two.) I turned that start of a sweater into a scarf. (One I haven't posted about yet.)
I also found that I didn't have the desire to restart the same project. So I went back to ravelry and found a new sweater to make him. I wanted something bulky so that it would knit up quickly. It did go quickly. Although not quickly enough for me to finish by Christmas. But still - good enough! (He already had enough gifts under the tree anyways. And more importantly what 4yo wants a sweater when he could get toys?!?!!) 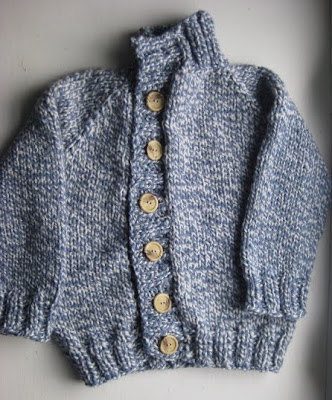 But I'm pretty happy with it. I might have done the buttons a little differently had I truly thought about it and not just followed the pattern. (Actually I think I misunderstood the pattern cause something just didn't seem right there.)
But yay! Now another year of Christmas sweaters is complete! I'm already looking forward to next year. (But glad I get to craft some other things in the meantime.)
(wow. did you notice I put a lot of stuff in brackets in this post??)
Posted by Jeanne at 14:51 3 comments:

When it comes to arts and crafts, I was never very good at the art part. You want me to knit you a hat or sew on a button or make a gimp bracelet (cause who doesn't want a gimp bracelet?), I'm your girl. But you want me to draw something... Not happening. The only thing I ever got good at drawing was electrical circuits in University. I wouldn't call that art.
Yet, every Christmas something comes up in which I try to be artsy. It just happens. Normally it ends in disaster, but this year, I'm actually fairly impressed by my Christmas eve midnight efforts. (Yeah. Took me awhile to get a pic of this...) I don't ever really want to see another piece of construction paper again, but I think I did a pretty good job at this one: 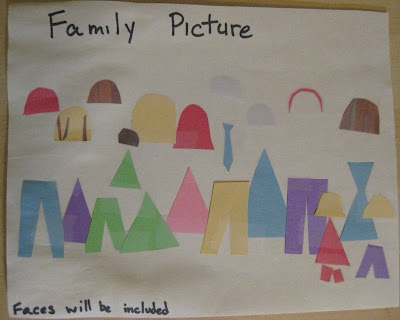 This is how my siblings and I told my mom about her Christmas gift: a family picture. (Not sure why I put myself in a pink skirt...) You'd think that would be a boring gift, but with my family it is not an easy thing to manage. We've been planning it for 4 months! Last year we took a picture, with someone holding my younger brother's HS graduation picture (he's like 25, so not a recent pic) just so that he was "in" the picture.
So, that was my art for 2010. I have one more 2010 craft still to come. The nephew sweater is finally done!! Now I just have to get a picture of it.
Posted by Jeanne at 17:39 1 comment:

Happy New Years to you! Happy 3rd blogiversary to me! I feel a little like: has it really only been 3 years? and it's only been 3 years! at the same time.
And with the blogiversary and New Years comes my knitting year recap. I did this last year, and found it interesting, so I thought I'd post my stats for what I made this year:
Hats - 18
Sweaters - 5
Scarves - 6
Shawls - 1
Headbands - 0
Socks/Slippers - 0
Bags - 0
Baby Afghans - 1
Mittens - 2
Dish cloths - 3
other - 3
All of those numbers are down from last year. (Except I made my first shawl, so that number is up.) With a long trip, and moving and WAY more soccer in the mix, I just haven't spent as much time knitting. But that's okay. It's still been a great year.
And here is one last craft from 2010. Aof the cardigans I gave for Christmas to my 2yo niece. 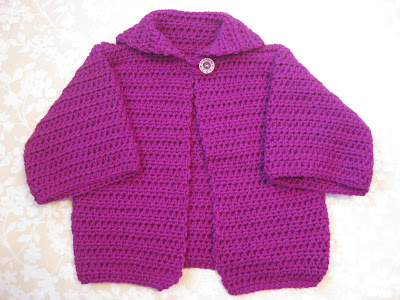 I hate to say it, but I hate it. I hate the sweater that is. The colour is okay... (not great...) but the result is just gross. Don't you think? 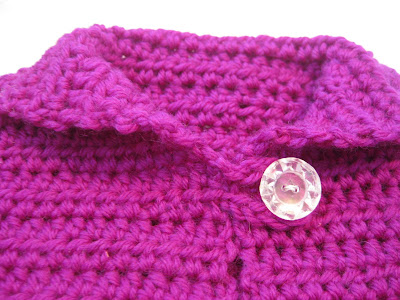 It bunched under the arms. And the collar is weird. And I'm not a huge fan of crocheted sweaters... But I'm going to blame the pattern. Not me. No. It's not my fault! Really... Probably... Perhaps? Luckily my niece is the cutest thing since this, and if anyone could pull off this ugly sweater it's her!
But all in all, it's been a good year. Hopefully there are more good crafts to come!
All the best in 2011!!
Posted by Jeanne at 09:00 2 comments: