Having just finished a pretty freaking huge project, I'll be honest with ya... I haven't really been in the mood to craft these past week. There's just been other things to do. Like pick strawberries and make jam! And finally get out for a bike ride. And hang out with my brother. And read a book or two.
Even so, it didn't take that long for my fingers to start itching to knit. Like a marathoner needing to run, my fingers felt like they were getting lazy. I decided to compromise. I didn't want to start another big project, so I decided to make a little one. One that I could start and finish well within the time frame of a World Cup soccer game.
With this little key cozy, that was easy! 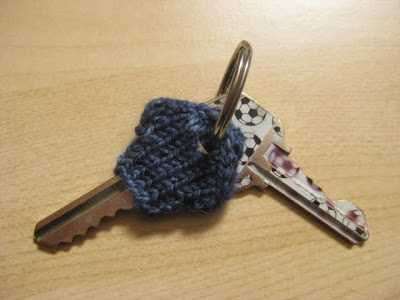 I've had this pattern in my ravelry queue for months now. (pattern from here.) And now I finally got around to doing it. It was fun, and fit the key to my parent's house without any mods required. Super fun! Too bad I don't have other keys that need colour coding, cause I would definitely make this pattern again.
Posted by Jeanne at 15:23 2 comments:

As you should probably realize by now, I'm all about giving people homemade gifts! Christmas, weddings, babies, birthdays and unbirthdays too! Really, any day is a good day for a homemade gift. But special occasions are more fun!
So when I got the invite to this very awesome girl's wedding, I knew I was going to have to make her something pretty special! Really special! 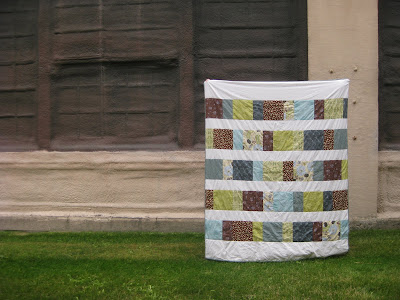 So since a friend of mine has been offering to teach me how to quilt, I figured this was a great time to learn how! And I have to say it turned out pretty nice for a first quilt!
I have to say right off that quilting is very, very different from knitting. It requires a whole other set of skills. I knew from the very first task that I was WAY out of my element.
When knitting the first thing you do is choose a pattern and the yarn. Similarly you have to choose a pattern and material. Only when choosing material there is now colour matching, minor colour coordinating, pattern matching and material placement. Let's just say it's a good think I had help and guidance on this step - and every single step - of the process!
Translation: Any part that is perfect, was probably the part my friend made. What isn't so perfect (like how I went through all of the layers a few times when I was hand stitching the border... Oops!) was done by me. 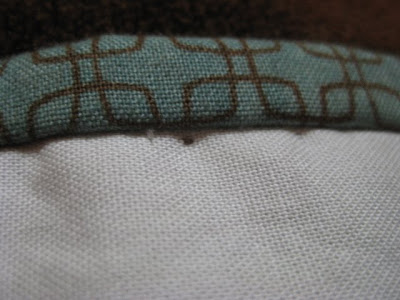 Because there are still some sewing that allude me. For example:
Does this look like an excessive amount of pins to you? 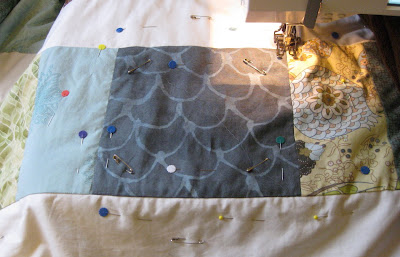 It probably would have to me the first block that I quilted... but it was HARD to get the two layers to lay flat enough so that they could be quilted together.
The pinning is probably what was the hardest and what took the longest. I backed it in a fleece that was warm and fuzzy, making perfect for the new spouses to curl up under in the winter and watch some tv. ... It also make it fussy to work with. 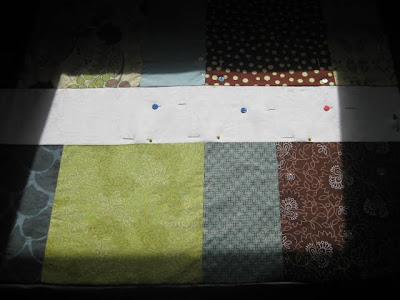 But it was worth it. And I'm pretty proud of the quilt. In fact, I love it! (I especially love the polka dot material!) 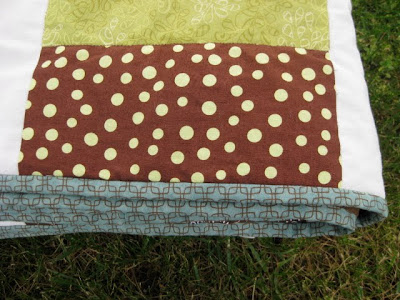 So, to end: Congrats Steph and John! All the best in your life together!!
(In case you are interested, I got the basic pattern for this quilt from here.)
Posted by Jeanne at 08:42 1 comment:

Sometimes you gotta try something new. How will you ever know if you like something unless you try it? New foods, new friends, new locations, new activities can all lead to an exciting adventure or discovery.
My latest new thing? Sewing! 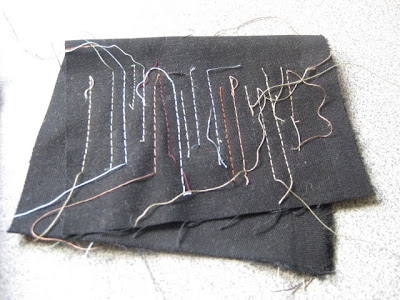 Err... not that I've never sewn before... I just don't do it a lot. (I've never loved it in the past.) And this new project isn't just sewing. It's Quilting! Quilting definitely needs a capital Q. It's a lot of work! And it takes a long time! I've been working hard on this project. For about 2 weeks and hopefully soon I will have a finished project to share!
I think all of the hard work has been worth it! I'm very excited about it! Very, very excited by it. (So when I post about it, even if you think it's ugly please say nice things... :) )
(The above picture is my short test runs after threading the machine to make sure it was threaded correctly. It's not hard... but it's a pain to seam rip something quilted.)
Posted by Jeanne at 07:29 No comments: 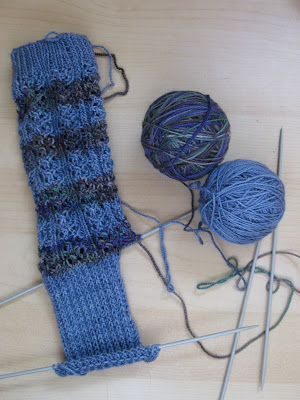 Obviously they are not done. This is just what socks look like when you are doing them from the top down and you are done the heel. It might look weird right now, but trust me, this is what they are supposed to look like. 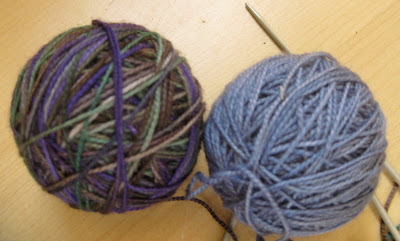 Unfortunately I don't really like the colours I've matched together for the stripes (I don't like the variated with the solid) but not much I can do about that now... Hopefully they will look better when they are done.
Posted by Jeanne at 17:12 1 comment:

I was thinking about why I love crafting the other day. I came up with a lot of reasons, but one I think might only be true for some crafter. Not all crafters, but some crafters. Geeky crafters mainly.
So why do I love crafting??
Obviously crafting is a great way to be creative!
I adore knitting and seeing something spring out of nothing more than just a simple ball of yarn. Wearing it/showing it off is fun too! It's a great way to show off your personality because what you make is unique to you. Even if you follow a pattern exactly, you still get to choose the colour of yarn.
Yes, I love crocheting because the repetitive motion is calming and a great stress reliever.
Of course, I like crafting because I like to give homemade gifts!
And there's just something about x-stitch and seeing it slowly turn into a picture that is pretty cool.
But one reason I love crafting, that I never thought would be the case? Math. 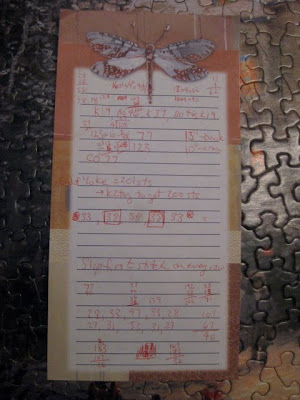 Yup. I love crafting, because at it's core, is mathematical. Just like Bach's music (maybe all music?) is mathematical. Or is a combination of mathematical and creative genius.
For knitting, you have needles and yarn and knowing how many stitches per inch you have you can knit enough to go around your wrist or head or neck or shoulders. The mathematical side of you can figure that part out. (as shown in the picture above.) But it's the creative side of you that adds the cables or lace work or flourish that makes a project unique.
But when you think of it, those flourishes are often mathematical too. Lace work is done in a pattern. It isn't just random. It's done with a purpose. Cables too. You set them so they are evenly spaced around the project.
Again, even if you are following a pattern, you have to be able to count. Go math its simplest!
I even find a way to make x-stitch mathematical. I noticed the last time I was working on a project that I'd in my head be trying to figure out how to use the least amount of floss. It's not like I was worried I was going to run out, but it was kind of a competition with myself. Is it better to go over two and up four or over three and up three? All because it gives me math.
And that, my friends, is why I knit and wear a GEEK button on my Ravenclaw scarf.
Posted by Jeanne at 07:33 1 comment: