Are you surprised when someone recognizes you and you think they shouldn't? I always am. I guess in most cases it has something to do with the red hair. In yesterday's case it may have had to do with the red hair and looking like I'm too young to be knitting. (although I'm way older than I look and have been knitting since I was 6. But, I digress.)
So, I went into my LYS yesterday and after nicely telling the middle aged lady that I was just looking around, I proceeded to spend about 1.5 hours picking out yarn for my four next projects. 4 projects! After the penguin, I've been floundering a little bit as to what to do craft wise. I've felt so weird about not crafting, but I never had time to get to a yarn store. (The store I normally closes before I'm done work on weeknights and if open for only a few hours on Saturday. Not idea. ) Finally, yesterday I got my chance! And did I take advantage of it. I think I spent $130+ on yarn. But at least I'm ready for my next 4 projects.
So, I went to checkout with armloads of yarn. The woman who rang me up said - "I haven't seen you in a while." I took a closer look, and I recognized her too. She'd cut her hair since I'd last been in the store. But it's one thing to recognize the owner of the shop and another to recognize a patron who only comes in once every like 6 months. I told her that I'd been without a craft for a while and was remedying the fact. "Yeah," she said. "When you walked in I realized you haven't been around in a while."
What? Do I stick out that much? I did once pretty much imply I didn't want her help choosing the yarn for my project (Oops. I wasn't trying to be mean, but I didn't need her help...) but hopefully that hasn't made me notorious. Hopefully, she only recognized me because of the hair an age. Either way, at least I got to shop for an hour and a half by myself.
And here's what I bought! 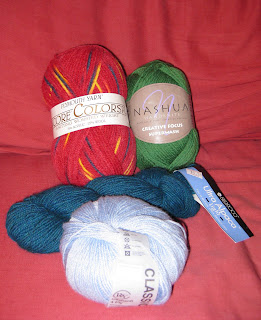 The red is for a gender neutral afghan for a small bun who is going to become either my niece or nephew. (Yay!) The dark blue is a sweater for the same small miracle. The green will be a sweater for me! February lady. And the light blue is for leg warmers. Yes. I know... Leg warmers. We'll see how that goes once I get there. 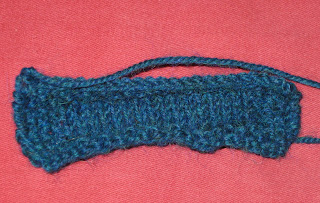 I haven't done much yet, since I only got the yarn yesterday and I've been busy with other things on my errands/rest day. (Oil change, shopping, Stanford volleyball game...) But I did my swatch, and it turned out okay I think. As close as I can hope for. 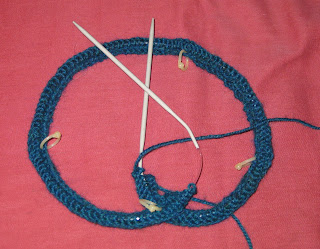 And then I started the sweater. Can't wait to do more! Although for now, I'm off to soccer.
Posted by Jeanne at 19:11 No comments:

It's done!
My next little project. It's a penguin (obviously) and I made him/her for a friend of mine who is pregnant with her third child. 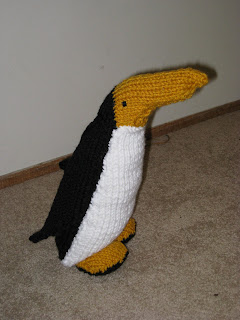 Her first two kids got afghans, but I don't think that they got used, so I decided to make something different. (Plus, I didn't want to buy yarn and make an afghan if it wasn't going to be used, and I had all of this cheap yarn left over from old projects. cheap? Yes.)
But I like him! I think he's quite cute. I have a few other doll patterns from the same book, and I think I might make the one of the elephant for Xavier for Christmas. We'll see.
Posted by Jeanne at 10:50 No comments:

Here it is! Finally finished and framed even.
(Sorry it’s another post about this! It’s the last one, I promise.) 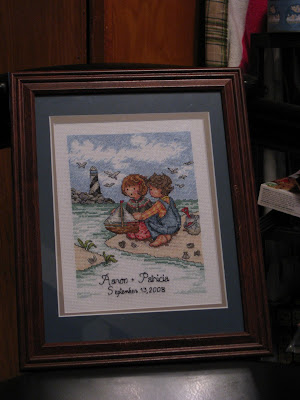 I ended up solving my dilemma by writing “September” in a different font than their names. I had to do that anyways so that it would fit! September is just too long and it would have been too tall to fit if I hadn’t used a smaller font.
On the whole I’m pretty proud of it!
But there are a few things that I would do differently next time. Most of them have to do with the framing, so it isn’t too big of a deal.
- I don’t like how far apart their names are. I actually redid the names twice, but wasn’t willing to do it a third time to get the spacing just as I wanted it. I really should have planned that one out better before hand.
- For the framing, the mats don’t totally match. As in, the mats aren’t perfectly square to each other. I should have done measurements rather than just using the mat that came with the frame as a reference.
- I should have cut the aida down to a smaller size, angling the corners as well and then used a sewing machine to finish the edges. As it is now the edges aren’t done. And it was hard to close the back of the frame. If I’d cut the edges so that there would have been no overlap, there would have been one less layer to have to close into the frame.
- I need better tape for finishing off. Hockey tape just isn’t where it’s at.

Now next time I just hope I remember all of this!!
Posted by Jeanne at 14:53 No comments: