It's December! Can you believe it!?! It's time to count down until Christmas!! And the BIG knitted gift giving of 2009. Oh what a glorious day that will be. I hope there is snow so my family will have no choice but to wear what I made them! Oh the fabulous things I've been making...
Only... I've been struck with ADHD again. Yup. Look at this: 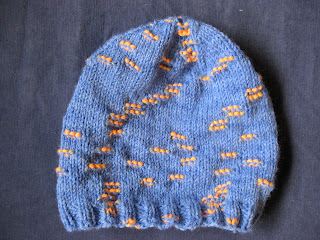 This hat is so not something on my list of gifts for Christmas 2009. Nope. Not on there. But I made it anyways!
I just haven't been able to concentrate on finishing a project recently. Nothing new, but this time around I'm blaming it on nanowrimo. How that? you ask. Well, I was so focused and dedicated to finishing that task, that it used up all of my concentration. Now that I no longer need to focus (because November is over and I won! Yay!!) on anything. I can't stay on task.
So I made this hat. 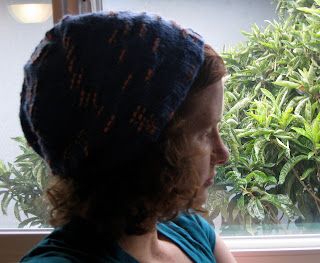 Not the mittens of the sweater I should be working on. They're boring. And half done. So hat it is! I had the yarn and it was perfect for the pattern. Why not make it?

Luckily, it was a super fast knit. Super easy to make. The yarn does all the work! You get a yarn with two colours and then just purl the stitches of the opposite colour to make the little ridges. (Hence the name!)
I thought it turned out really well. I like that I made it slouchy and for the first time it sort of worked. All the other times I've tried it, the results have been only so-so. But this time, with this hat it worked! It's totally simple, yet it looks pretty cool (imho).

So, although I wasn't planning on it, I have another hat to give away at Christmas. Cause really... I have more toques (beanies... whatever.) than I know what to do with. But don't think that's going to stop me from knitting them. Not a chance! Not a chance in the world. In fact, I bet you'll see another one before the end of 2009. (Pretty safe bet to make since it's about me and knitting.)
Posted by Jeanne at 14:33

rock on for quick hat patterns!! they are the best in between instant gratification project for sure! :)