Wowzers! Isn't this a cute bag?
I'm pretty proud of it. Mostly because I came up with the design all on my own. Really. I did. It's fun to just sort of knit on the fly. Well, it's fun to knit on the fly when it works out. Like this time! I'm quite happy with the results.
I made this bag as a gift for a very cool girl... 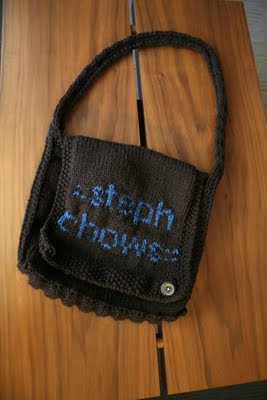 If you can't figure out who this bag is for.... then you've got problems. Big problems. You're probably illiterate. Which means, you probably aren't reading this.... Soo.... moving on.

Anyways, here are the instructions for what I did. My first pattern? Kinda? They are more like notes on what I did. And there's probably mistakes in it, so follow at your own risk...

Little Brown Bag: (How's that for a pattern title?)

Directions:
Using the provisional cast on method, cast on 9 stitches.

Working on the round:
(I used A LOT of DPN for this. For some reason I have 2 sets of size 9's, and I used all 8 needles to work on this. It's awkward at the start, but it gets easier as the bag gets bigger and I eventually moved to a circular needle. If it helps, you can also place markers to mark the front, back and side panels.)

Okay! You're at the top of the bag. There are two sections to work next: The handle and the flap. You can do either next.

Repeat Row 1-6 until the handle is approximately the length you want, but a little shorter. It'll stretch. Trust me.

Pick up the 11 stitches from the side where the handle is suppose to attach and weave together using the stitch.

Flap:
Onto the flap! As you can see I put a design in mine. You don't have to, but you can! Get some graph paper and design what you want to be on the flap of the bag and then just knit it in! But remember to put it in upside down. You are knitting from the top down after all. This is what you do in general.

Repeat R2&R3, adding in your design if you want on on the flap of the back. Continue until the flap is 6 rows short of being the same length as your bag, ending with R3. Then:

Sew in loose ends. Pick cute button. Sew on said buttons.
Put something in it and then go for a stroll to show it off!
Posted by Jeanne at 10:49