I've been wearing arm warmers all week. (I'm wearing some right now as I type!) Some days I wear them just because arm warmers are cool, and other days because the weather's been cold. 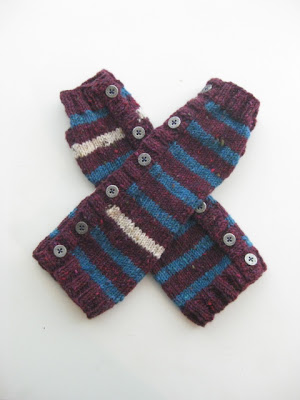 What's up with that? Com'on. It's almost May! 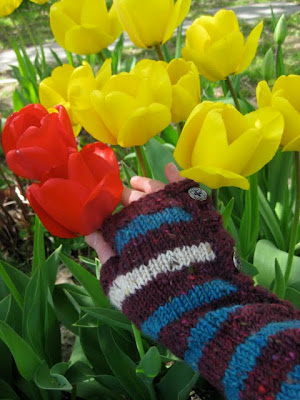 But even if it wasn't cold, I would wear these arm warmers. In fact, I have worn these to work many times. They're by far my favourite of all the pairs I've made and bought! (And that's saying something.) 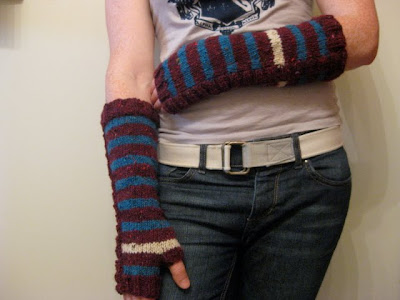 I saw the pattern here, and loved it. Who doesn't love Dr Horrible?
Unfortunately, I had to do a lot of modifications to make them as awesome as they are. The main problem I had was because of the yarn I chose (it was pretty stiff), so I do not blame the pattern. But here's what happened: 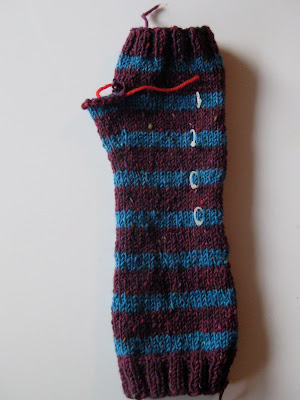 Doesn't it look cute? This is the result from the first time I knit this sucker up. Cute, cute, cute. (The first time I made them all the stripes were blue, but then I realized I wasn't going to have enough blue to do both, so I added the white stripes. Perfect. And stylish? Jury's still out on that one...)
So, they looked cute when sitting on a table, but not so much when they were on my arm.
Look here: 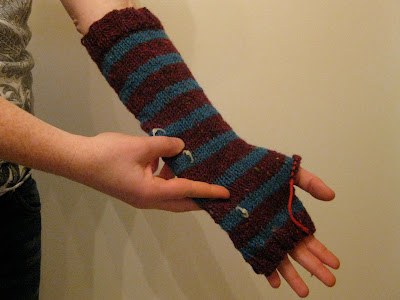 Look at all that extra yarn. Yuck! They didn't fit at all. They practically fell off.
So I frogged them. But first I used my markers to figure out how many stitches I would need where to make them fit (assuming no stretchiness). (See two pictures above.)
With that recorded, I set out and knit them again. And this time I didn't knit them straight, like the pattern suggests, but knit them on the round. So much faster for me. And I decreased/increased where needed. And VOILA! Added the flap and buttons (love the buttons too), and that's what was needed to make my favourite arm warmers.
Posted by Jeanne at 09:15

Cool! Love them! And I love their documented lifecycle! :)

They look amazing. Good you increased/decreased, I've got a pair of cably handwarmers that are too big.

totally cool! and the buttons always make them super fun :) I could use a pair today, my boss has the AC bumping in here!! BRRR!!