What is it with pink? I say I hate it, but then three of my last few projects have been in pink. Like these! 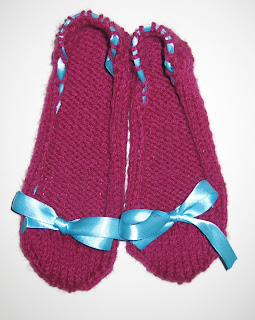 Aren't they super cute? I saw the pattern on Ravelry and immediately started them. I wonder what it is about a project that makes me think, "I have to start these right now!" I have patterns in my queue that have been there for 8 months+, and I still like the patterns, and I still plan on making them. One day. But these I saw one night, and by the next morning they were on a set of needles.
And they were a super fast knit too. It only took a few hours to do each! And did I mention they are cute?
I had both the yarn and the ribbon in my crafting stash, but I think they pair nicely. Okay. They are bright, but whatev. I actually chose the pink cause I wasn't sure I was going to like the finished product so I figured if they suck, not much will be lost on these. Only some pink yarn I don't care much for. Well, I like them so much I just might have to make another pair in an even better colour scheme!
Like I said, it was a quick knit. The pattern (named after Amy March from Little Women - a book I love to death!) was written out a little oddly. It was more like someone talking you through it rather than a how to instruction guide. If that makes sense. I did get to learn how to do toe up knitting and I think the next pair of socks I make will be toe up! Hmm... maybe I should go look at sock patterns. Yeah.
Well, I know now what I'm going to be doing for the next... hour.
Posted by Jeanne at 22:54

I LOVE those cute little slippers! They are adorable!!!
P.S. We've been enjoying the jam you sent our way. L & BR know that jam is from you. Strawberry rhubarb is the best!