Today, it pretty much snowed all day. It is January in Ottawa. I probably shouldn't be surprised. Yet even after all that snow, somehow there was only a thin layer of snow for me to brush off my car at going home time. So, all in all, not too shabby.
Plus, it gave me a chance to try out the new cowl.

Yes. I have a weird facial expression here, and a weird camera setting going on... 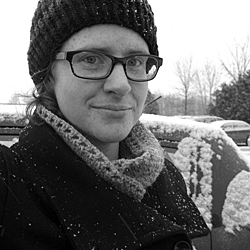 Anyways, I got the pattern here, and really like it the look of the cowl. But if I was going to do it again, I'd do it with much thicker wool. The pattern is mostly SC which means it doesn't grow quickly. I could have made this cowl wider, but just got bored and decided - good enough.

Right? Hope so. I'm already looking forward to the next project.

That's it. That's all.
But I've felt it's been a good year for doing the crafts I really want to do.  Hopefully that trend will continue in 2012.

happy blogaversary!! wow 4 years! go you! even if this was a slow year that's a TON of things you made!!

Happy Blogoversary! You looked shocked to be wearing a cowl!