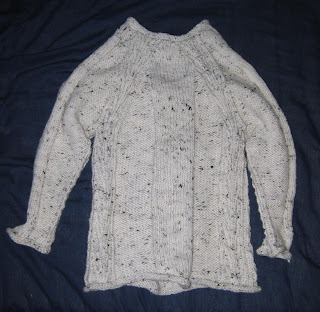 I just sewed it up this morning. (I couldn’t leave it so close to finished and not complete it. I had to finish it before heading out to work!) And I’m really happy with it. 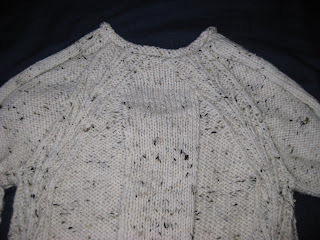 I’m happy with it even though there's a mistake in it. Yup. A mistake. But I couldn't bring myself to take it out to fix it. I don't even really know where the mistake happened! Somehow I ended up with too many stitches at the end. Three too many stitches and they are all on the left front side. What’s up with that? How did I forget to decrease three times and have it all happen on that one side? Odd I tell you. Odd.
But I’m just going to let it go. It’s not going to hurt anyone if it has a slightly bigger neck. Especially since the neck was too small Xavier's sweater last year that it didn’t fit over his head and I had to redo the neck! Seriously, on Christmas morning I was remaking his gift. Luckily, he was 1. I think he’ll forgive me. So this year a few extra stitches probably doesn’t matter too much.
The sweater is actually probably going to be a little big for Xavier. He turns 2 just before Christmas, and the pattern size was for a 2/3yo, so it’s pretty big. But that is way better than being small. Hopefully he’ll actually get a lot of wear out of it. It’s a sweater. He lives in Canada. He better get a lot of wear out of it.
Hear that bro? Make your kid wear the sweater while you still have control over his waredrobe! 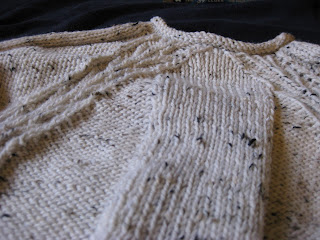 So, best thing about this pattern? That I’m done with it. For some reason it and I just didn’t mesh. It makes a nice sweater and I’m really satisfied with the results, but I had a hard time with it and had to frog or redo or stop to read the instructions a MILLION times over, so many times that it just got frustrating.

I’m freaking excited about the next thing on my list to knit. If it works out, I’ll post it here, if it doesn’t you’ll never hear about it again.
Posted by Jeanne at 13:53