If any month was to be a month of Mitten MADNESS, December really does make the most sense? Doesn’t it?

So, as you may recall here, I bemoaned the fact that I really wanted Kristen Stewart’s mittens. I wanted them so much, I made up my own pattern! (At the time, you had to pay for the one that was on ravelry, and I didn’t like that pattern much anyways. Pictures are so key. I’m not sure I like the free one up there either, even though I do think it’s closer to the movie pair, but more on that in the next post.)
But, look! I made my own set! They’re sorta close. 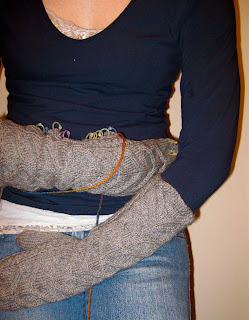 I love them! But, I hate them. I made a few updates on the 2nd one in the pair, and it’s getting better… But I think there’s still a ways to go. 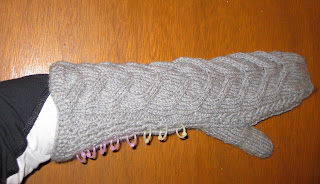 The next pair I make are going to be better still. I’m sure of it. Really. And I will make another set. (And maybe give these slightly unmatching mittens away as a gift. I can think of a few people who would love them and never notice the differences! Is that mean of me?) 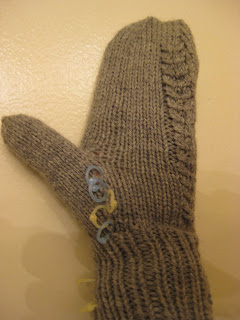 But I have other mittens to make now.
Turns out my family is doing a Secret Santa for all of the older generation of people. We all get things for the kids (oh wait. There’s only one (and two thirds)!) and then we only have to get stuff for one other person. So much easier than buying for 8 people I see only one month of the year. That’s so hard!
So I got my mom, and as part of her gift I think I’d like to make her mittens. I think she’d like a (slightly) funky pair of mittens. Too simple and they aren’t cool. She was the one who taught me to knit after all, so it has to be somewhat interesting to impress her.
Mom also commissioned me to make a set of mittens for Xavier. I wasn’t planning on it. He already has the sweater coming his way, but she wants them for him. She babysits him at least 1 day a week, and she wants knitted mittens for car rides, and things, when super hot store bought mittens are too much, but bare hands aren’t cool for a 2yo.
So. Mitten Madness is about to ensue!
Now, I just have to find a fun 2yo pattern and one for my mom.
And then perfect my Bella Twilight mittens.

(Preliminary pattern to come.)
Posted by Jeanne at 11:25